This is the third weekly installment of my GSOC blog series. More info on the progress of the Fedora JBoss Spin can be found on the Fedora wiki.

As I mentioned last week, this week would see me inactive until later in the week. Unfortunately, I didn’t get back to normal until Friday morning, so here’s a short summary of what I’ve been doing since then.

When catching up with my emails, I got a message from rel-eng on the ticket I had submitted last week regarding the buildroot override: it’s now a self service procedure, so obviously wherever I read about it on the wiki is a little out of date! I created it, and then Mikolaj Izdebski helped me out a lot by reviewing the wsil4j package that I was waiting on. Again, this took a few iterations before it was in an acceptable state to be pass the review stage, and I learned more each time.

After that, I got started on making an initial version of the kickstart file for the spin, as this weekend is what was set for the alpha release. My first few attempts at this were unsuccessful, and I was getting not-altogether-helpful error messages.Everything would work fine, until I would add the Fedora Eclipse yum group. I had no real idea why it was failing here, as package groups are widely used in kickstart files. I didn’t get very far with this on Friday, as each try takes a significant amount of time and data!

I continued with trying to get the eclipse group to work with the kickstart file, and eventually I made a breakthrough: I was referring to the package group the wrong way.With yum, there are two ways to install a package group. In the case of the Fedora Eclipse group, the most explicit way would be yum groups install Fedora\ Eclipse; with the alternative way being yum install @eclipse. In the kickstart file, I was trying a horrendous mix of the two: @Fedora Eclipse. I’m not exactly sure how to get the @name for package groups, usually I install by getting a list of all groups with yum groups list, but that doesn’t provide the short name. I’m not sure how I figured out @eclipse, it may have been a guess.

Since none of the JBoss Tools are ready yet, they obviously can’t be included in the spin, so for now it’s similar to the default Fedora live desktop spin with GNOME 3. The most notable differences are that it includes the Eclipse IDE, with the webtools packages that are packaged for Fedora thus far; and also JBoss AS 7. These are sizeable additions, so at around 1.3GB, the spin is already too large for a CD. The other changes that I’ve included are just to include some tools that I think could be helpful for a JBoss developer: git, svn, cvs, and mercurial, and xchat. I also modified the favourites menu, as can be seen in the screenshot below. I’ve put the kickstart file online here. 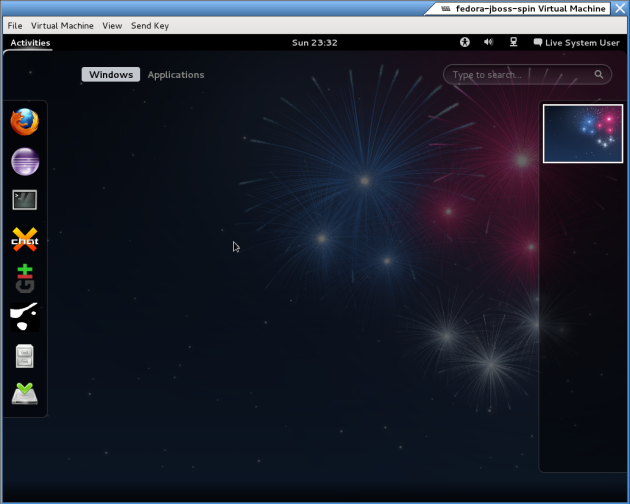 Today I got back to trying to package the eclipse-wtp-jeetools that I had started. Thankfully, there are not as many patches needed for this as there were with eclipse-wtp-webservices! It mostly just needed some shuffling of the feature.xml file. There’s one plugin that is still proving problematic, so for the moment, it’s commented out, and not being built. I eventually got it to build anyway, and created a working spec file for the package. I won’t submit it for review yet until I communicate with some of the wise people of the Java SIG, and see if they have an solution to the issue regarding the plugin that refuses to build.

That’s all for this week, I’m sure the coming week will be a busy one!